HOLLYWOOD INK-SLINGER ANDREW OYE: ONCE AND FOR ALL, PREMISE AND THEME ARE COUSINS NOT TWINS

Attention, fellow screenwriters, storytellers, and film and TV producers. Ready for a game-changing, industry-shifting announcement? (Okay, maybe not so much, but I start all of my ‘Once And For All’ articles this way.) Premise and Theme Are Cousins Not Twins.

When describing or pitching movie or TV projects, story buzzwords help relay (and, hopefully, sell) an idea (and make us sound like we know what we’re talking about): concept, genre, premise and theme. For some less experienced writers, these terms, particularly the latter two terms, are difficult to define or differentiate. Some have even asked: Are premise and theme the same?

In my estimation, premise and theme are related (i.e., cousins) but not the same (i.e., twins). In fact, all of the aforementioned terms can be “related,” in the sense that they all serve in describing aspects of a story in a full-scale pitch. 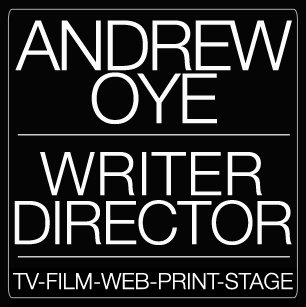 The premise is the subject of a story, while the theme is the meaning extracted from the story. In essence, the premise is what the story is about, while the theme is what the story is REALLY about. In my article “Once And For All, ‘High Concept’ Is A Noun Not An Adjective,” I state that the concept is the “main idea” of a story, which is closely linked to premise.

The premise often lives in the “logline”— the industry term for a brief pitch of a story (preferably in a single sentence). In the examples from my “High Concept” article, I offer three basic concepts that can be developed into story premises: A woman goes on a journey. A man lands in danger. A family rediscovers love.

To develop basic concepts into premises, we bolster them with the specifics of our unique stories. To extract value from the premises, we explore themes— in the form of deeper meanings or overarching messages that permeate the stories we choose to tell— which, in turn, helps to structure our logline pitches.

The ABCs of building a logline: A (Who?) + B (Does/Experiences What?) + C (Why, Where, When, How, or Then What?). In my ABC equation: The A and the B combine to form the premise, strengthened by the hook, the C— this is also where one might expound on the theme. I specify “might,” because the theme is not always included in a written logline; sometimes, it is merely shared as part of a verbal pitch to drive home the soul or raison d’être of a story.

PITCH EXAMPLE 1
Genre: “It is a broad comedy.”
Premise: “A neurotic, slow-lane driver goes on a cross-country journey but realizes the one thing she seeks was left on the kitchen counter.”
Theme: “The story shows ‘home is where the heart is,’ or ‘we already have everything we need,’ or ‘you don’t have to travel far to experience a journey.’”

PITCH EXAMPLE 2
Genre: “It is a contemporary thriller.”
Premise: “A high-profile CEO lands in danger when he realizes a telecom business deal could lead to billions…and the end of the world.”
Theme: “The story shows ‘simple decisions can have complicated consequences,’ or ‘wealth tempts us,’ or ‘for some, too much is never enough.’”

PITCH EXAMPLE 3
Genre: “It is an inspirational animation.”
Premise: “A dysfunctional family rediscovers love at a baby-animal petting zoo, where they realize animals are treated better than they treat each other.”
Theme: “The story shows ‘love is universal,’ or ‘compassion applies to all creatures,’ or ‘animals can actually teach/train humans.’”

In the example pitches, the premise proposes story content, while the theme summarizes notions that characters (and audiences) confront, discover or analyze. Basically, every story we tell raises and answers questions. The premise answers the smaller (read: specific) question(s)— “What if?” The theme answers the larger (read: broader) question(s)— “So what?”

A base-level breakdown of the four general story descriptors:

Concept = Idea
What is your story about?

Genre = Type
What kind of story is it— Action, Comedy, Horror, Thriller, Science Fiction or Drama?

Premise = Proposition
Which “What if?” question(s) drives your particular story?

Theme = Message
Which notions/beliefs are tested or explored in your story?

At some point, all the terms interact and intertwine like a “functional family.” They influence each other, but each plays its role. So, when you’re marketing, pitching or describing your story, introduce family members by their proper names. “Meet my cousins: Concept, Genre, Premise and Theme. Each has his or her individual personality, which adds to the family portrait I’ll paint in my script or screenplay pitch.”

In summation, premise and theme share a similar bloodline, not identical bone structure. A premise indicates how a story unfolds. A theme is a truth hidden in the folds of the story. Sometimes, writers start with a theme then build a story premise around it. Other times, writers uncover a theme (or several themes) from a story after it has been written.

So, write stories with a mission— to “show and tell” in your premises what others will ultimately “see and hear” in your themes, as they “watch and learn” from your art.

As always, this is simply my opinion amid the semantics smorgasbord, and others may view this subject differently. We can respect each other, while focusing on what is important – telling (and filling up on) delicious stories. Mmm.